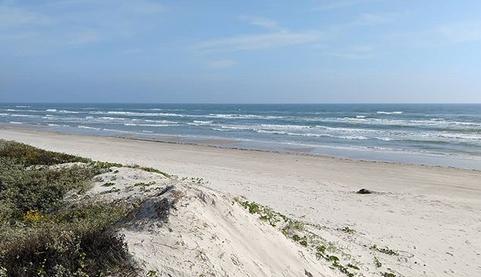 Ann and I founded Salt Masters LLC in 2016 after discovering the importance of quality sea salt with its essential minerals in our diets. We bought sea salts from around the world, and we researched how they were processed and their various uses. After much research and with my background in process technology, where I have patents and patents pending, we decided to make our own line of pure sea salt to rival any in the world. First, we needed world-class clean seawater with consistent high salinity, little sediment, very little freshwater runoff, and little chance of industrial pollution. We started testing water from the North to South end of Padre Island and found the ideal location near South Padre Island with all the qualities we were seeking on a consistent basis. Padre Island was named Isla Blanca by the Spanish for its brilliant white sands rising out of the clear Gulf waters.

We hand harvest all our seawater in small containers in the deep guts in between the breakers in the surf zone on Isla Blanca. The waves keep the water oxygenated and the salinity and minerals consistent at all depths. From the island, we bring the seawater to our cottage salt factory where we settle any natural sediment and carbon filter the water into shallow pans where we slowly evaporate the water where we gently skim newly formed salt crystals to make Fleur de Sel or allow the crystals to grow longer and flatter to make a Flake salt. Both are dried to the right moisture content for the salt type and the Flake salt is stone-ground to perfection. Every batch is tested and exceeds EPA drinking water quality standards.

We suggest that our Gulf Coast sea salts and seasoned sea salts are used primarily as finishing salts to enjoy its quality to the fullest. We pinch our salt, as do most chefs, or use a small salt spoon to drizzle the salt onto dishes as a finish. Please contact us if you have any questions or comments on our products. Wishing you health and wellness.

Sea salt is a broad term that generally refers to unrefined salt derived directly from a living ocean or sea. Most manufacturers of sea salt typically do not refine the salt, so it still contains natural traces of other minerals, including iron, magnesium, calcium, potassium, manganese, zinc, and iodine.

Proponents of sea salt rave about its bright, pure, clean flavor, and about the subtleties left by trace minerals. Sea salt is thought to be healthier and more flavorful than traditional table salt.

Isla Blanca Flake and Fleur de Sel Finishing Sea Salts are the premier varieties of specialty salts. Harvested by hand in South Padre Island, our finishing salts are most admired for their unique textures—either moist crystals or delicate flakes. Both varieties provide a strong crunch and dissolve quickly, resulting in a burst of clean, mild flavor with each bite. These salts enhance the depth of natural flavors in any dish, and enrich a table setting with beautiful, shimmering presentation.

Flake Sea Salt is a light crystal reminiscent of snowflakes. Seawater is slowly evaporated , producing salt brine that is fed into an evaporating pan. The brine is then slowly heated until delicate pyramid-shaped crystals of salt are formed. The finished product is light, flakey sea salt. Flake salts can come in many different sizes, from large pyramid-shaped flakes to paper-thin, delicate flakes.

Fleur de sel is obtained by hand harvesting the young salt crystals that form on the surface of salt evaporation pans giving the Fleur de Sel its characteristic crunch and clean light taste. This exquisite salt is hand harvested and is considered to be queen of all salts by the famous chefs and cooks everywhere. Our Fleur de Sel is collected at a single source located in South Padre Island, Texas. Great on: grilled meats and seafood. Exceptional on: rich chocolate desserts

Most sea salts contain 84%-87% sodium chloride (40% sodium) and are rich in essential minerals. A general rule of thumb is that 2 to 3 times less sea salt is required to get the equivalent taste as table salt.

Table salt is the most common kind of salt found in the average kitchen. It usually comes from salt mines. Once mined, it is refined and most minerals are removed until it is pure sodium chloride (97% sodium). A common sentiment is that this process creates a more bland and bitter salt than unprocessed varieties, not to mention the removal of the potential benefits of its trace minerals.

Most table salt is also available in either plain or iodized forms, where the salt is artificially spray coated with iodine. American salt manufacturers began iodizing salt in the 1920s during The Great Depression, in cooperation with the government, after people in some parts of the country were found to be suffering from goiter, an enlargement of the thyroid gland caused by an easily-preventable iodine deficiency. Today we know that most people require less than 225 micrograms of iodine daily. Seafood and many dark greens, as well as sea salt, contain iodine naturally, and the supplement is unnecessary if there are sufficient quantities of either in one’s diet. Table salt typically contains around 96% sodium chloride and additives such as sugar, calcium silicate and ferrocyanide.  Natural sea salt is a healthy replacement for ordinary table salt.